Middle School. I often call it the holding place while tweens and young teens get through the major changes during puberty. I firmly believe that is why middle school came into play. Several decades ago schools went K-8 then 9-12. A lot of private schools still do. Well someone somewhere must of gotten smart and said put those hormonal age kids in their own building – and bless all of you wonderful adults that breach those buildings to teach our future!  You are brave!

Dress code!  OMG…even as conservative as I am about clothing choices – like no two-piece swim suits until you are 18 – the dress code is a bit over the top at our schools.  No leggings or jeggings, even if the shirt covers the booty!  No yoga pants or too tight pants.  The most ridiculous one, in my opinion, is the no sleeveless shirts.  Specifically it says no skinny straps or tanks, all shirts must have sleeves.  Technically, the popular ‘cold shoulder’ shirts do not break dress code.  I’m not sure I want to see anyone test that theory, but if it were to happen and I was around to witness it, I would definitely argue it! #ThatMom.  Apparently, and this according to my daughter, showing bare shoulders is distracting to the boys.  Well, here is my answer on that – if people would quit sexualizing girls bodies, wearing a sleeveless shirt that still covers their bras and cleavage, wouldn’t distract them.  Seriously, what about boys that are attracted to other boys, wouldn’t their shoulders be distracting?  No the boys can’t wear sleeveless or tank either, it’s just the point.

All that aside, clothing and looking trendy is extremely important to some tweens and teens – that would include my child.  I am on the opposite end of the scale – passes the sniff test, good to go.  I haven’t updated my wardrobe in years!  Melaina will update and add pieces every couple months.  And, truth be told, she’s lucky she is good at saving her money, because we do not buy that much of her clothing.  In total this year, including backpack and school supplies, our portion of money spent is under $300.00.  She bought the other stuff.

Her current fav jeans are from Rue21.  “They fit a curvy butt and don’t gap in the back when you are sitting.” she answered, when I asked why we had to get them from there.  Luckily it was during a buy one pair, get one pair free sale. #Winning  It, apparently, takes more than just shopping for her to be trendy.  The right shoes – her choices are Adidas, Converse, Nike.  So far, the pairs from last year still fit, but I am expecting a growth spurt before the year end, so funds have been set aside for new shoes when that happens.  If left to her own choices, she would need an entire closet just for shoes.  I have managed to keep her from spending her money on more than necessary.  For her, I think 2 pair of tennis shoes, one pair of seasonal trend shoes and a pair of boots or flats is sufficient.  I told her I have nothing against a closet full of shoes, but she would be smarter to wait until her feet have stopped growing, so a good pair will last awhile.

Listening to her and her friends talk, the clothing is just as important to kids and each other as it was when we were in school.  I don’t get it, hair can be any style or color and as long as they own it, it’s cool.  Wear something that is too out of season, but not old enough to be retro, and kids will get shunned or teased or talked about behind their backs.  And if I hear it or see it, I will put an immediate stop to it.  If you don’t know the person well enough to say something to their face, then keep your mouth shut.  Period.  You want to talk snark about someone? I’ll listen all day.  And play devil’s advocate with the opposing argument…ahhh the benefits of being a Gemini, literally two opposing voices in my head at all times.  On all subjects.  I am responsible for my own insanity!

I am not sure if clothing choices have played a part in Melaina’s friend choices – I will hold on to ignorance is bliss for this one – but I do know some kids that are subtly shunned because of it.  It leaves tiny cracks in my ice-queen heart to know that being yourself and owning it in today’s society can still separate kids into cliques.  These crazy years need more support from parents and other adults in their lives.  Sadly, it doesn’t really change in the real world as adults, but with the proper support while growing up, they can be the best them and not let the rest of it matter.

If you want to join some fun discussions with Melaina and I, head on over to my Facebook page and follow along! 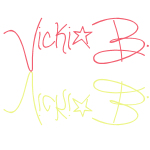